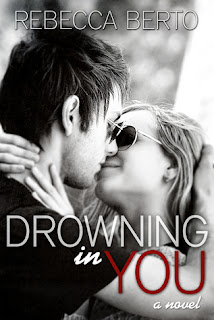 Hey Guys! Today I'm happy to be one of the hosts on the DROWNING IN YOU BLOG TOUR!!!

Drowning In You
by Rebecca Berto
Now Available!!!
Genre: New Adult Contemporary Romance
Drowing in You on Goodreads here.

Crushed by a tragedy

Charlee May’s been crushing on Dexter Hollingworth since she was fifteen. Five years later, a horrific skiing disaster at Mason’s Ski Lift Resort leaves her millionaire dad critically injured and her mom dead at the hands of Dexter operating the lifts. Charlee is suddenly the sole caretaker for her little brother while their world falls apart.

Dexter couldn’t be more different from Charlee. He’s tattooed, avoids exclusive relationships and his Dad has a fair share of illegal dealings. With Dexter’s reputation, almost everyone believes he planned the Mason’s skiing disaster.

And after all these years he’s still crushing on Charlee May, the girl who’s too good for him.

When this cruel twist of fate ties Charlee’s family and Dexter’s reputation together, Charlee and Dexter wonder if their feelings are reciprocated, while Dexter discovers his dad is trying to steal the May’s millionaire fortune.

But like an addiction, one look, one touch, one taste—they’re hooked no matter the consequences.

My Thoughts:
An intense and angst-filled New Adult debut!

The intensity comes from the rocky relationship Dex and Charz share, and I mean, wow, the sexual chemistry will keep you turning the pages. This isn't an instant-love story, these two have had years of pent-up feelings for each other and when they finally act on these feelings, well watch out folks!

Of course there is quite a bit of familial drama keeping these two apart, a lot of this is based on misplaced guilt, but you'll be rooting for these two to work through the drama, throughout Drowning in You.

The reader is given dual narratives from both Charz and Dex's perspectives, so we're never left with any doubt about the feelings and actions of each, and I really enjoyed both of these characters, especially Dex. He's the sexy, dangerous playboy that the whole town warns Charlee against, but she just can't help herself (and to be honest, once you've read the book, you really can't blame her haha).

Overall, I think readers who enjoy extra helping of drama and angst with a side of intense sexy times, in their New Adult, will really enjoy Drowning in You. 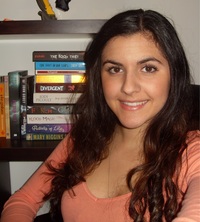 Rebecca Berto is the author or the dark contemporary/literary novella, PRECISE and the upcoming new adult contemporary romance novel, DROWNING IN YOU. She is also a freelance editor.

She writes stories that are a bit sexy, and straddle the line between Literary and Tear Your Heart Out. She gets a thrill when her readers  are emotional reading her stories, and gets even more of a kick when they tell her so. She’s strangely imaginative, spends too much time on her computer, and is certifiably crazy when she works on her fiction.

Rebecca Berto lives in Melbourne, Australia with her boyfriend and their doggy.

Author Guest Post: How to Write an Entertaining and Angsty New Adult Novel

Cliché or no cliché, that is the question.

Back in June 2011, The extreme bad boy with tattoos, a possessive nature, border-anger problems, and an extreme love for a good girl he can’t have was brand new, hot and the start of a trend. Enter Beautiful Disaster.

Fast forward to May 2013, and it’s been done over and over so many times, that it’s old news.

The thing is clichés aren’t always bad. In my opinion, a novel with in the New Adult genre with the above aspects can do just as well today as it could almost two years ago when Beautiful Disaster started it all. It’s just a matter of how the characters are formed, and what direction the story is taken.

Some tips:
·      -Why can’t the guy wear a pair of dorky glasses, enjoy helping out with a charity in his spare time, yet party often and enjoy drinking with mates?
·      - Let the main character/s act a certain way for a reason. I.e. Are they afraid to commit because they’re parents divorced early and blamed them for the break up, thus scarring them against healthy relationships?
·      - For bad qualities to your character, have good ones for balance, too. I.e. The college-aged character could have a little sibling or a family friend or even a stranger they met they and feel they need to take under their wing. That creates empathy and thus an acceptance that we’re all human and we do stupid things from time to time because we aren’t perfect.

To avoid:
·      - Typical broken character, burned by love and hesitant to commit yet finds a good girl and has never felt so strongly for anyone before. (Done before and it’s cliché without adding any depth or the author’s personal twist.)
·     -  Sudden pregnancy/Misunderstood twist that makes the lover think the other is cheating/sudden death. (All three are flashing alerts that could be only seen to up the drama because everything is going too smoothly for the H/h. If that’s all one of those elements is, drop it. It’s cliché and there’s no new, personal spin.)

To sum up popular storylines or characters can work well if used in a New Adult novel with a different spin. Maybe the author can introduce a quirk, or an unconventional past to a character for freshness.

However you choose to write your angsty New Adult novel, remember that people love HEAs, love troubled characters an­d a troubled love story. You want themes people like, but you need to OWN it. Make your own mark in the genre!

That’s all from me. Thanks for having me, Booking It With Hayley G.

Thank YOU Rebecca for stopping by and sharing your thoughts and helpful tips! :)

But wait!!! Rebecca has a giveaway especially for YOU! Fill out the Rafflecopter below to be entered to win 1 of 5 ebooks of Drowning In You, and it's International!!! Good luck to all!

Special thanks to Rebecca and Xpresso Book Tours, for
allowing me to participate in this blog tour!