Today, I'm happy to be one of the blog stops on the Strength Blog Tour! 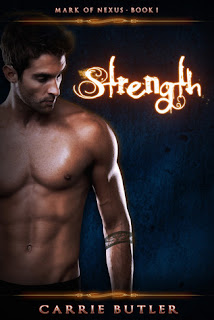 Too curious for her own good, Rena vows to uncover the truth behind Wallace’s madman reputation--and how two seconds of contact had left her with bruises. Of course, there are a few setbacks along the way: guilt, admiration, feelings of the warm and fuzzy variety…

Not to mention the unwanted attention of Wallace's powerful, supernaturally-gifted family.

They’re a bloodline divided by opposing ideals, two soon-to-be warring factions that live in secret among us. When Rena ends up caught in their crossfire, Wallace has no choice but to save her by using his powers. Now they’re really in trouble. With war on the horizon and Rena’s life in the balance, he needs to put some distance between them. But Rena won’t let go. If fighting is what it takes to prove her own strength and keep Wallace in her life, then that’s what she’ll do--even if it means risking a whole lot more than her heart.

Check out the trailer:

My Thoughts:
Steamy New Adult novel, with a Paranormal twist!

Rena is a great narrator of this story. Her humour kept me laughing and I found it very easy to relate to her snarky attitude.

BUT it was Wallace that made this book for me! He's the ultimate Alpha male, strong, tall, gorgeous with a bit of a hero complex, he'll do whatever it takes to keep Rena safe- including keeping his distance. I just wanted to cuddle him and help him through his grief and guilt.

My heart went out to Rena and Wallace in their struggle to connect with each other on a physical level. Although, this made for some seriously steamy moments, filled with sexual tension. I was routing for them from the very beginning, when they met face-to-chest, haha.

Rena's two besties, Gabby and Aiden made for interesting and humorous sidekicks.

Overall the pacing of Strength was great, the beginning starts off with adrenaline pumping suspense, but the middle was little winded for me, I actually wouldn't have minded Rena discovering Wallace's secret a bit sooner, but I really enjoyed the ending- it gave me enough closure to look forward to its sequel, without panicking about what happens next. Thank God for no cliffhangers!

If you enjoy your New Adult with some steamy romance and a dash of Paranormal, than you must check out Strength. The cover alone should be enough to make you want to read it! haha.

My Thoughts: About the Author: 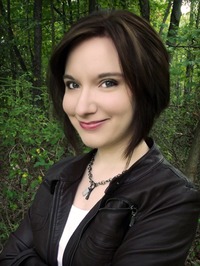 But wait!!! Before you go, be sure to enter to win 1 of 5 copies of Strength! Good luck to all!
a Rafflecopter giveaway

Special thanks to Carrie and Xpresso Book Tours for allowing me to participate in this tour!
Posted by HayleyAG at 3:00 AM